AstraZeneca got a boost from positive results in a major clinical trial of its Covid-19 vaccine in the US and South America.

The pharma giant’s shares rose 1.4 per cent, or 125p, to 8958p after the trial showed that its Vaxzevria vaccine was 74 per cent effective at preventing symptoms developing, rising to just over 83 per cent for those over 65. The results were published in the New England Journal of Medicine.

There were no cases of severe Covid-19 infection among the 17,600 people across the US, Chile and Peru who received two doses of the vaccine as part of the trial, as well as zero incidents of a blood clotting side effect that caused concern earlier this year. Overall, the trial involved 32,451 people across the three countries.

AstraZeneca’s shares rose 1.4 per cent after the trial showed its Vaxzevria vaccine was 74 per cent effective at preventing symptoms developing, rising to over 83 per cent for those over 65

However, the 74 per cent figure was lower than the 76 per cent effectiveness that the company originally reported in March, which itself was lowered from 79 per cent after US officials said Astrazeneca had based the results on ‘outdated information’ in a rare public rebuke.

Despite this, the trial results are likely to boost the chances of Vaxzevria securing approval from the US Food and Drug Administration (FDA), adding more regulatory weight to the vaccine which has already been approved in 170 countries including the UK.

The firm said in July that it was planning to file for FDA approval, although the vaccine is not expected to play a major role in the US itself. 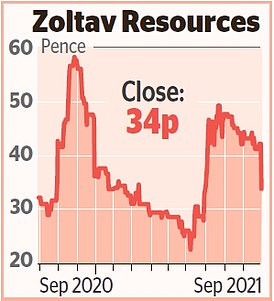 Russia-focused oiler Zoltav Resources tumbled nearly 20 per cent after warning that it may have to delist from the market amid a cash crunch.

Chairman Lea Verny said the company was currently negotiating with two Russian banks to fund its East Bortovoy project, which is considered vital to its survival.

However, Verny warned that any deals with the banks could restrict its cash flow, meaning it would be ‘unable to maintain’ its AIM listing, adding that if no funding was found it would also not be able to repay its loans. Shares crashed 19.1 per cent, or 8p, to 34p.

The company is also producing the vaccine on a not-for-profit basis during the pandemic. So far, around 1.3bn doses have been distributed worldwide.

Investors seemed unsure of which way to turn amid ongoing issues, with rising bond yields, supply chain problems, the energy price surge and wider inflation all lingering in the background.

Amid the energy crisis, the battle for survival among the UK’s utility firms continued, with some reaping rewards from their rivals’ collapse.

Telecom Plus, the owner of gas, electricity and broadband provider Utility Warehouse, rose 1.3 per cent, or 16p, to 1216p after three competitors, Igloo Energy, Symbio Energy and Enstroga, went bust on Wednesday, leaving 233,000 customers without a supplier.

British Gas-owner Centrica, which has taken on thousands of customers from collapsed firms, was up 0.6 per cent, or 0.36p, to 56.68p.

However, smaller providers in the sector saw their shares slide amid fears they could be next on the chopping block, with AIM-listed supplier Yu Group dropping 5.1 per cent, or 12.5p, to 235p.

Investors went cold on meal delivery firm Parsley Box, which plunged 38.13pc, or 37.6p, to 51p as it was crippled by supply chain shortages.

The group, which listed in March but since then has seen its value tumble by over two-thirds, said its stock was currently only 50 per cent of its target, and as a result, it had made the ‘difficult decision’ to slash its spending on marketing until the crisis subsided.

It added that due to the supply issues it expected its full-year revenues to be around £25million, slightly higher than the previous year, and that it would suffer a ‘consequential impact’ on its profits.

Elsewhere, Made Tech, a firm that upgrades technology for the public sector, made a strong start to life as a listed company as it began trading on AIM following an £85m fundraising.

The company’s shares ended their first trading day at 135p, 11 per cent, or 13p, higher than their fundraising price of 122p.

There was similar good news for small-cap investment firm Bay Capital, which saw its shares reach 18p on its first day of dealings.

The shares were 80 per cent, or 8p, higher than the 10p per share offered in a pre-IPO funding round which raised £7million.

Some links in this article may be affiliate links. If you click on them we may earn a small commission. That helps us fund This Is Money, and keep it free to use. We do not write articles to promote products. We do not allow any commercial relationship to affect our editorial independence.