Type 2 diabetes could be ‘reversed’ if patients use a pioneering once-a-week jab, experts say

A once-a-week jab can put type 2 diabetes patients ‘into remission’ – slashing blood sugar to normal levels, cutting cholesterol and blood pressure, and helping patients lose a stone and a half or more.

The results of a pivotal trial into the drug, announced at the European Association for the Study of Diabetes annual conference last week, found that it vastly outperformed current treatment regimes, offering hope to those with the incurable condition.

The new medicine, tirzepatide, is so effective it may offer patients a viable alternative to weight-loss surgery, which is at present the most effective method of treating patients who need to lose large amounts of weight and bring their type 2 diabetes into remission.

The cost of surgery can range from £4,000 to £15,000 privately, depending on the type of procedure, and fewer than 7,000 such operations are carried out on the NHS each year.

Tirzepatide is not yet licensed, but it would be expected to offer the NHS a saving on the cost of surgery, say experts.

There are more than 4.5 million Britons living with a type 2 diabetes diagnosis at present, and 13.6 million are said to be at risk of developing it.

Tirzepatide once-a-week jab can put type 2 diabetes patients ‘into remission’ – slashing blood sugar to normal levels, cutting cholesterol and blood pressure, and helping patients lose a stone and a half or more

The findings add to a growing body of evidence about the treatment’s remarkable effectiveness, meaning health chiefs may now consider giving it the green light.

‘Surgery is available to only a tiny minority of patients. To have drugs that give similar results would have been unheard of until a few years ago, but it’s likely that will be the case in the near future.’

One of the first type 2 diabetes patients to benefit from tirzepatide lost an astonishing 4st after four months of weekly self-administered injections.

Retired telecoms boss David Batson, 64, from Leicestershire, who took part in the trial between December 2019 and March 2020, also saw his blood sugar fall into the non-diabetic range and his blood pressure return to normal.

‘And I achieved it all by doing nothing more than sitting down in my living room and reading a few books,’ he said.

Tirzepatide is a new type of drug that combines an existing form of medication called glucagon-like peptide-1 (GLP-1) receptor agonists, and a new, similar drug, known as a glucose-dependent insulinotropic peptide, or GIP.

GLP-1 receptor agonists have been in use for about a decade and have transformed type 2 diabetes treatment.

Given alongside other diabetes medicine, such as metformin, they work by mimicking naturally occurring hormones involved in digestion and help patients who find they can’t lose weight through diet and exercise alone.

The drugs send signals to the brain, helping curb the appetite, stimulate the body to use up glucose in the blood and lower the amount of sugar that’s digested and absorbed from food.

A number of GLP-1 receptor agonists are now available, including exenatide, liraglutide and semaglutide, which is available in both injection and tablet form.

However, the inclusion of a second active ingredient, GIP, is what some experts say makes tirzepatide more effective.

GIP works in a similar way to GLP-1 receptor agonists, mimicking a naturally occurring digestive hormone, helping both stimulate insulin release and absorption of sugar from the blood.

Given on its own, it was ineffective in type 2 diabetes treatment – for reasons not fully understood. But in combination with other medicines, it had a transformative effect.

On the trial, 1,879 patients – mostly middle-aged – were given self-injector pens. 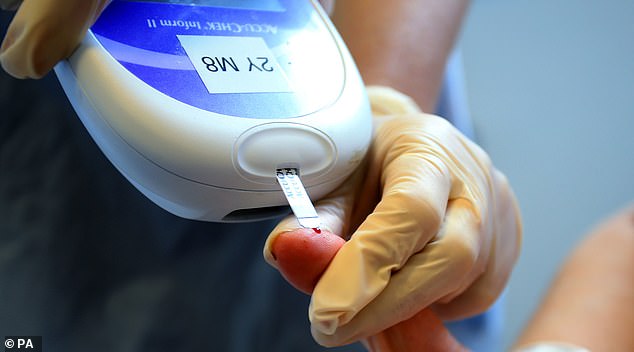 There are more than 4.5 million Britons living with a type 2 diabetes diagnosis at present, and 13.6 million are said to be at risk of developing it

They were instructed to take either a dose of tirzepatide, or semaglutide once a week for up to ten months.

The new drug worked better than semaglutide in every aspect, giving greater weight loss and better blood sugar control even at the lowest doses.

Professor Naveed Sattar, an expert in diabetes and metabolic medicine at The University of Glasgow, welcomed the new findings.

‘In some respects, these drugs mimic the process of remission,’ he said. ‘The key to developing diabetes is usually excess fat building up in the liver and other organs. Losing a considerable amount of weight gets rid of this, so the body can function normally again.’

Mr Batson is convinced of tirzepatide’s effectiveness after his brief stint on it. He was diagnosed with type 2 diabetes and high blood pressure seven years ago, after a routine mid-life health check-up.

David, who lives with his wife Elizabeth, a chef, began the trial in December 2019 when he weighed 18st. By March, after four months taking tirzepatide, he weighed 14st.

‘I looked like a different person,’ he said. ‘My clothes no longer fitted. I did feel a bit more tired, as the weight loss was so rapid.

But other than that, and feeling a bit nauseous in the first few days of being on the treatment, there were no side effects. I still ate, but I felt less hungry – I didn’t have the same appetite I used to.’

Since stopping tirzepatide, David has put on a stone. ‘I’m keen to go back on it,’ he said. ‘I know how serious diabetes is – people can end up losing their sight and having limbs amputated. I want to avoid that.’

If everyone washed their hands properly with soap, it would save more than half a million lives a year.

Studies have shown that soap-washing reduces the risk of diarrhoea by 45 per cent and pneumonia by 23 per cent.

Researchers at the London School of Hygiene & Tropical Medicine estimate that if everyone in the world washed their hands regularly it would drastically reduce the number of child deaths from these preventable illnesses by as many as 600,000.